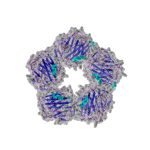 C-Reactive Protein (CRP) circulates in the blood plasma as a stable homopentamer and a prominent member of the acute-phase inflammatory proteins. CRP functions mainly in innate immune defense and levels increase in response to inflammation, infection, tissue damage, necrosis, malignancy and allergic reactions (1). CRP has diagnostic value as a marker of systemic inflammation in the body and as an independent risk factor for cardiovascular diseases in adults and children (2, 3). CRP, also known as pentraxin 1 (PTX1), is a member of the pentraxin family which has several structurally related members. Most CRP is produced by hepatocytes in the liver induced principally by the inflammatory cytokine interleukin-6 (IL-6), but also by IL-1β and TNF (4). Read More...

CRP binds several targets including phosphocholine, a common constituent of polysaccharide coatings of bacterial pathogens and mammalian cell membranes. This allows CRP to function as an opsonin, facilitating phagocytosis of pathogens and dead or dying cells (4, 5) and trigger the classical complement pathway by activating C1q. CRP binding also can stimulate macrophage tumoricidal activity, and protect against septic shock (5). Another mechanism by which CRP interacts with the innate immune system is through its interaction with Fcγ receptors (FcγRs) on myeloid cells, B lymphocytes, NK cells, and platelets (6).

Circulating CRP levels in humans are normally quite low, but they increase several hundred-fold during the acute-phase response. Elevated serum CRP levels have been associated with the presence of cardiovascular disease (7, 8). Numerous research studies investigating serum CRP and its relationship to other diseases have also been reported. These include hypertension, (9, 10) diabetes, (11, 12) cancer, (13) autoimmune disorders (14), obesity and metabolic syndrome (15, 16). Additional literature suggests possible links between oral health and chronic infection, inflammation, oxidative stress and heart disease (17),(18). Studies have also linked elevated serum CRP levels to oral contraceptive use (19, 20).

For CRP there is encouraging research that suggests salivary CRP may be more strongly associated with serum CRP than is true for other inflammatory markers. CRP is prohibitively large to pass from the circulation into the salivary glands by passive diffusion, and it is believed that small amounts of CRP enter whole saliva mainly as a component of the gingival crevicular fluid (GCF) or through salivary glands. Whole saliva is much easier to collect than GCF, which could make saliva the oral fluid of choice for routine assessment of CRP in clinical or field studies.
As with measurements of salivary cytokines, however, the question of local CRP production in the oral cavity must be considered, since it may obscure the relationship between blood and salivary levels and the interpretation of salivary CRP in relation to other analytes of interest. Although the majority of CRP is thought to originate from the liver, CRP and IL-6 mRNAs have been detected in gingival tissue samples from periodontitis patients and CRP gene expression has been correlated with IL-6 expression (21).

Several studies have examined the relationship between salivary and serum CRP. One study reported a moderate to strong association between CRP measured in saliva and in serum, while a second longitudinal study found that salivary and plasma CRP were moderately associated cross-sectionally and across two years (22, 23).