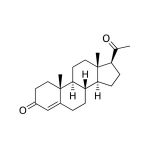 ​Progesterone (4-pregenene-3,20-dione) is a steroid hormone of primary importance in ovulation, fertility,  pregnancy, and menopause.  Synthesis of progesterone takes place in the placenta, adrenal glands, and gonads. (1-4)  In normal, non-pregnant women during the mid-luteal phase of the menstrual cycle, progesterone exhibits a prominent circadian rhythm with additional ultradian components.  Peak production occurs in the evening around 6 PM. (5) In pregnant women, progesterone also exhibits a similar rhythm during the second and third trimester, with a nadir in the morning and a peak in the late evening. (6) In males, progesterone is thought to play some role in testicular physiology. (7) Read More...

In addition to its role as a sex hormone, progesterone also serves as a precursor compound for many of the other steroid hormones.  Progesterone is also synthesized in the brain and nervous system, where it functions as a neurosteroid that can influence survival and growth of cells, (8,9) and it is involved in brain development and behavior. (8-11)

In blood only 1 to 15% of progesterone is in its unbound or biologically active form.  The remaining progesterone is bound to serum proteins.  Unbound progesterone enters the saliva via intracellular mechanisms, and the majority of progesterone in saliva is not protein-bound. (12)  Correlations obtained between plasma and salivary levels measured in the same subjects have generally been quite high. (13)​