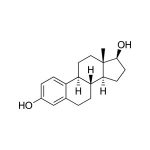 ​Estradiol is one of the three main estrogenic steroid hormones present in humans.  It is the most active naturally secreted estrogen. (1)  In menstruating women, estradiol is produced primarily by the ovarian follicles from testosterone, with additional amounts produced by extraglandular conversion of testosterone in peripheral tissues. (1,2,3,4)  Concentrations peak mid-cycle, marking ovulation, followed by a rapid decline with a smaller secondary increase during the luteal phase. (5,6)  In women of reproductive age, estradiol exhibits a diurnal rhythm where the peaks tend to occur in the early morning; the timing of the peaks is shifted later during the menstrual phase. There are also ultradian harmonics superimposed upon the basic diurnal rhythm. (7)  In post-menstrual women, small amounts of estradiol continue to be made from estrone and testosterone in the peripheral tissues, but estrone, also produced peripherally, replaces it as the predominant form of estrogen. (8,9)   In women, estradiol is responsible for the development of secondary sexual characteristics, enhancing breast development and affecting body shape, bones, joints, and fat deposition. (10) Read More...

In men and pre-pubertal children, estradiol originates principally from extraglandular conversion of androgens; men also have small amounts produced in the testes. (11,12)  In men there is no diurnal rhythm to estradiol production. (13)

In addition to its role in sexual and reproductive functioning, estradiol also affects other parts of the body, including the cardio-vascular system, the brain, and the immune system. (14-17) Estradiol has also been studied for strong relationships with cancers of the breast, ovary, and uterine lining. (18-20)

In the blood only 1 to 15% of estradiol is in its unbound or biologically active form. The remaining estradiol is bound to serum proteins. Unbound serum estradiol enters saliva via intracellular mechanisms, and in saliva the majority of estradiol remains unbound to protein. (21) The correlation between serum and saliva samples is high. (22-24)​