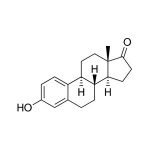 ​Estrone (3-hydroxy-1,3,5(10)-estratrien-17-one; E1) is one of the three main estrogenic steroid hormones produced in humans. Circulating estrone levels are relatively high at birth in both males and females, decrease postnatally, and increase during puberty. (1) Of the three major estrogens, estrone is predominant after menopause in women. (1) Read More...

In premenopausal women estrone is primarily produced by conversion of androstenedione in the ovaries, with concentrations peaking in the preovulatory phase and a smaller secondary increase during the luteal phase. (1,2) In post-menopausal women, children, and men, estrone is largely produced by conversion of androstenedione in peripheral tissues. (1,2,3) Estrone is subsequently reduced to estradiol in various peripheral tissues. (3)

In non-pregnant women, only about 3% of estrone in the bloodstream is not bound to proteins. (4) Unbound estrone enters saliva from blood via intracellular mechanisms, and in saliva the majority of the estrone remains unbound to protein. The saliva and plasma values are highly correlated. (5) ​