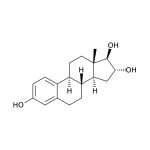 Estriol (1,3,5(10)-estratriene-3,16α,17β-triol; E3) is a female sex steroid hormone largely associated with pregnancy and fetal development.  Fetal adrenal DHEA-S is metabolized in the fetal liver to 16α-hydroxy-DHEA-S, which is then converted to estriol in the placenta. (1,2)  By the second trimester, about 90% of the estriol produced is derived from this fetal adrenal DHEA-S. (2)  Maternal circulating estriol levels rise progressively during pregnancy, reaching a peak in the third trimester.  Production of estriol depends on an intact maternal-placental-fetal unit, and maternal salivary estriol levels have been used to monitor fetal status during pregnancy. (2,3,4,5) Estriol is also used as part of the Tri- or Quad-Screen Test for detection of fetal genetic defects. (6,7) Read More...

The physiological roles of estriol in non-pregnant women are not well understood and are under investigation.  With respect to estrogenic activity, estriol is generally though to be less potent than estradiol or estrone.  However, it has been pointed out that, with regard to nongenomic signaling pathways and functional responses in the pituitary, estriol is a strong estrogen. (8)

Changes in levels of estriol and the other estrogens that occur due to menopause, pregnancy, and hormone replacement therapy have also been studied extensively for relationships to cancer susceptibility. (9-14)  Estriol has also been investigated for its relation to autoimmune diseases such as multiple sclerosis and systemic lupus erythematosus, since pregnant women show significant reductions in symptoms during the last trimester of pregnancy. (15-19)  Estriol has also been examined for its role in bone and lipid metabolism, and its function as a protective neurosteroid.  (20,21)

In blood the majority of estriol is bound by serum proteins, with about 14-16 % remaining unbound. (4,22)  Unbound estriol enters saliva from blood via intracellular mechanisms, and salivary concentrations closely approximate unbound plasma concentrations. (3,23) There is virtually no protein-bound estriol in saliva. (4)   Correlation between serum and saliva samples is highly significant. (24)​

How to Collect Saliva for COVID-19 Testing

Collecting a saliva sample for COVID-19 testing is simple and easy to do with our Saliva Collection Methods. Relax – that’s the first step! Then watch one of these video collection instructions prior to starting your collection: