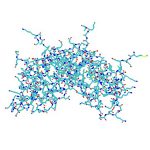 Human interferon gamma (IFN-γ, IFN-gamma) is mainly produced by lymphocytes as a glycosylated 19.3 kilo Dalton (kDa) cytokine that exists as a non-covalently linked homodimer. In general, IFN-gamma is a central regulator of innate and adaptive immune responses mounted against viral infection, mediates cell mediated immunity such as anti-tumor immune responses and is a hallmark of T helper type 1 (Th1) immune responses (1,2). In this capacity, IFN-gamma is a potent activator of macrophages and induces Class I and Class II MHC (major histocompatibility complex) expression. When IFN-gamma is expressed by Th1 lymphocytes, it polarizes the T cell response towards Th1 in a positive feedback loop by inducing Th1 differentiation from Th0 cells, while suppressing Th2 differentiation. Measurements of IFN-gamma can be used to identify T-cell driven pathology. Read More...

Dysregulation of IFN-gamma is associated with a number of disorders including autoimmune diseases, Huntington’s disease and IFN-gamma levels are increased during hepatitis C infection and Tuberculosis (3). IFN-gamma may also be used as a general indicator of active viral infection. Since IFN-gamma is elevated during stress induced reactivation of herpes virus family members, such as Herpes Simplex Virus 1 (HSV1) or Epstein Barr Virus (EBV), it is possible that levels of salivary IFN-gamma may be used as a marker for stress related immune suppression. This use of IFN-gamma as a surrogate for stress induced immune suppression is an area of research that may add to others, such as cortisol, in the stress field of study.

The validated method used by Salimetrics is proprietary and not available in assay kit form at this time.