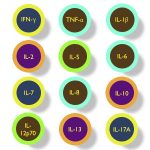 The expanded Salimetrics Cytokine Panel provides researchers the flexibility to measure 4 core cytokine (IL-1β, IL-6, IL-8 & TNF-α) levels in saliva samples - plus, up to 8 additional cytokines (IFN-γ, IL-2, IL-5, IL-7, IL-10, IL-12p70, IL-13, and IL-17A). Researchers now have the capacity to customize a panel that fits their research question. Salivary cytokine concentrations for a combination of, or all 12 analytes can be measured simultaneously using a single saliva sample and features convenient custom panel pricing. Small sample volumes can be especially beneficial for infant, children, or impaired participant studies or for research where investigators are routinely limited in the amount of saliva that can be collected. Read More...

IL-1β, IL-8 and TNF-α are three important examples of a class of signaling molecules known as pro-inflammatory cytokines, which play an important role in initiating the body’s acute phase inflammatory response to infections, injuries, or possibly stress. IL-1β and to a lesser extent TNF-α, have been strongly associated with oral inflammatory conditions including gingivitis and periodontal disease. These conditions play a larger role in more severe systemic diseases such as cardiovascular disease and diabetes. IL-6 also induces the production of C-reactive protein (CRP) in the liver, which when elevated chronically can lead to obesity. Importantly, several reports indicate that all four cytokines may contribute to the pathogenesis of certain oral cancers and have been implicated as markers for early oral cancer detection. Therefore, in addition to their utility in assessing oral inflammation, these markers may also be of interest in other fields, including cancer, asthma, and stress research.

By adding any 2 additional cytokines (IFN-γ, IL-2, IL-5, IL-7, IL-10, IL-12p70, IL-13, and IL-17A) to the core 4, researchers can customize an ideal solution for research critically focused on multiple analytes to be assayed from the same sample.

How to collect Salivary Cytokine Panel

Human Tumor Necrosis Factor Alpha (TNF-α) is a potent proinflammatory cytokine that induces the classic signs of inflammation to occur locally and is one of the cytokines that make up the acute phase reaction. TNF-α is mainly produced by activated macrophages as a 25.6 kDa protein that forms a noncovalent homotrimer, but can also be secreted by a variety of cells. Large amounts of TNF-α are released in response to lipopolysaccharide and other bacterial components and interleukin-1. It is a potent chemoattractant for neutrophils. It also stimulates IL-1, which induces cachexia and causes fever. It can also induce sepsis and inflammation and can inhibit tumorigenesis and viral replication. Chronic TNF-α dysregulation has been associated with autoimmune diseases such as rheumatoid arthritis and inflammatory bowel disease as well as psoriasis and asthma. TNF-α can be inhibited by the exercise induced myokines such as IL-6 and IL-10. In healthy individuals with no signs of oral inflammation, TNF-α is often very low to undetectable. TNF-α is expression is elevated in periodontal disease and gingivitis (22,23) and oral cancer (31).

Human Interleukin-1 Beta (IL-1β, Interleukin-1β), also known as IL-1F2, is a 30.7 kDa pro-inflammatory cytokine mainly produced by monocytes and activated macrophages and is a key mediator of host-defense to infection and tissue injury (11). IL-1β stimulates thymocyte proliferation by inducing IL-2 release, B-cell maturation and proliferation, and fibroblast growth factor activity. IL-1β is involved in a number of biological activities ranging from aging to wound healing. Along with IFN-γ, IL-6, and TNF-α, IL-1β is a pyrogenic cytokine that induces the production of prostaglandins, the major mediators of fever induction. IL-1β is also strongly associated with oral inflammatory diseases including gingivitis and periodontal disease(22,23). Salivary IL-1β, in addition to IL-6, has also been associated with socio-cognitive stress (24).

Human Interleukin-6 (IL-6) is involved in numerous biological processes including inflammation, aging, cell growth, apoptosis, and bone remodeling. IL-6 is a 23.7 kDa cytokine that is secreted mainly by T cells and macrophages and is also released from muscle cells during exercise in response to muscle contraction (26). IL-6 induces an acute phase response and plays an essential role in differentiating B cells into immunoglobulin-secreting cells. IL-6 is also a potent inducer of C-reactive protein in the liver. IL-6 is involved in osteoporosis, pulmonary fibrosis, liver cirrhosis, ischemia, and berylliosis, and oral cancer among other disorders (27-31). In saliva IL-6 has also been associated with other disorders of interest such as chronic periodontitis (22,23), socio-cognitive stress (24) and childhood obesity (32).

Human Interleukin-8 (IL-8) is an 11.1 kDa CXC family chemokine that is expressed by several cell types in response to inflammation. It attracts and activates neutrophils, but also attracts basophils, and T-cells. IL-8 is secreted as a protein that is proteolytically cleaved to form several processed forms with varying activity. This proinflammatory chemokine is associated with numerous disorders including acute pancreatitis and oral cancer (31). IL-8 is readily measurable in saliva at a basal state, indicating the importance of continual recruitment of neutrophils to the oral cavity for immune surveillance as a means to maintain oral health.

Human Interferon Gamma (IFN-γ, IFN-Gamma) is mainly produced by lymphocytes as a glycosylated 19.3 kilo Dalton (kDa) cytokine that exists as a non-covalently linked homodimer. In general, IFN-γ is a central regulator of innate and adaptive immune responses mounted against viral infection, mediates cell mediated immunity such as anti-tumor immune responses and is a hallmark of T helper type 1 (Th1) immune responses (19,20). In this capacity, IFN-γ is a potent activator of macrophages and induces Class I and Class II MHC (major histocompatibility complex) expression. When IFN-γ is expressed by Th1 lymphocytes, it polarizes the T cell response towards Th1 in a positive feedback loop by inducing Th1 differentiation from Th0 cells, while suppressing Th2 differentiation. Measurements of IFN-γ can be used to identify T-cell driven pathology. Dysregulation of IFN-γ is associated with a number of disorders including autoimmune diseases, Huntington’s disease and IFN-γ levels are increased during hepatitis C infection and Tuberculosis (21). IFN-γ may also be used as a general indicator of active viral infection. Since IFN-γ is elevated during stress induced reactivation of herpes virus family members, such as Herpes Simplex Virus 1 (HSV1) or Epstein Barr Virus (EBV), it is possible that levels of salivary IFN-γ may be used as a marker for stress related immune suppression. This use of IFN-γ as a surrogate for stress induced immune suppression is an area of research that may add to others, such as cortisol, in the stress field of study.

Human Interleukin-2 (IL-2) has several roles in the immune system, immune tolerance and immunity against pathogens, primarily by its direct effects on T lymphocytes. In general, depending on the context, IL-2 can function to initiate or dampen immune responses. IL-2 promotes the differentiation of immature T lymphocytes into regulatory T cells, which help protect against autoimmunity. In the presence of stimulated antigen, IL-2 drives T cell differentiation into effector T cells and later into memory T cells that function to fight off infections. Also, IL-2 promotes T cell differentiation into Th1 and Th2 lymphocytes while inhibiting Th17 differentiation. Elevated IL-2 levels have been reported in the saliva of patients with burning mouth syndrome and associated with severity of the illness (25).

Human Interleukin-5 (IL-5), mainly drives the maturation and maintenance of eosinophils and antibody secreting B cells and is a glycosylated 15.2 kDa disulfide linked homodimer mainly produced by eosiniophils (47) and T helper type 2 (Th2) cells (48). Dysregulation of IL-5 is associated with eosinophilia, atopic dermatitis and pulmonary fibrosis. Il-5 is also expressed in the mast cells of asthmatic airways (47) and is a promising drug target for the treatment of asthma and COPD (49). In fact, three therapeutic monoclonal antibodies (mepolizumab, benralizumab and reslizumab) have received FDA approval targeting IL-5 to treat severe eosinophilic asthma (50, 51). Measuring IL-5 in oral fluid is of interest for asthma and COPD researchers since fluids from the lung exchange with saliva and levels are elevated in asthmatic patients (51). Salivary biomarkers for asthma are appealing to researchers as they enable on demand sample collection, for example before and after asthmatic attacks, to enable testing of samples that have been collected at times that are difficult to achieve during a visit to a physician’s office or clinic.

Human Interleukin-7 (IL-7) activity is important for every stage of T cell development and survival of naïve T cells and generation and maintenance of CD4 and CD8 T cell memory. It is also important for the formation of lymphoid structure and defense mechanisms mediated by lymphoid cells. Pathologies associated with IL-7 are those mediated by dysregulation of lymphoid function such as autoimmune diseases, such as diabetes and multiple sclerosis, (53) and chronic inflammatory diseases, including rheumatoid arthritis and inflammatory bowel disease (54). IL-7 signaling is also associated with several types of lymphoid leukemias (52). IL-7 is a glycosylated 25 kDa hematopoietic growth factor that plays a central regulatory role throughout the lymphoid system (52).

Human Interleukin-10 (IL-10). IL-10 is mainly produced by monocytes and some lymphocytes as a 20.5 kDa, glycosylated homodimeric protein. It is an anti-inflammatory cytokine that inhibits the synthesis of numerous cytokines (including IFN-γ, IL-2, IL-3, TNF-α, TNF-β, and GM-CSF) that suppress Th1 proinflammatory responses involved in promoting phagocytosis. Secretion is at very low levels in unstimulated tissues and IL-10 regulates its own expression in a negative feedback loop. IL-10 also functions to enhance B lymphocyte survival, proliferation and antibody production. Like IL-6, IL-10 is linked to the myokines, as exercise provokes an increase in circulating levels of IL-1ra, IL-10, and sTNF-R, suggesting that physical exercise fosters an environment of anti-inflammatory cytokines. IL-10 levels are moderately elevated during acute stress (33) and oral cancer (34).

Human Interleukin-12p70 (IL-12p70) activates T cells and natural killer cells that stimulate the production of IFN-γ. It is involved in a number of disorders including periodontitis (35) and chronic toxoplasmosis (36) among others. IL-12p70 is a disulfide-linked heterodimer consisting of IL-12a (p35 subunit) and IL-12b (p40 subunit), mainly produced by macrophages and T lymphocytes and is part of a larger cytokine family that are attractive targets for therapeutic intervention (37,38). The IL-12a subunit also dimerizes with Ebi3 to form IL-35, and the IL-12b subunit dimerizes with IL-23a to form IL-23. IL-12, IL-23, IL-27, and IL-35 are all heterodimeric proteins and members of the IL-12 cytokine family (38).

Human Interleukin-13 (IL-13) is secreted by a variety of immune cells as a 15.8 kDa, glycosylated monomeric cytokine involved in a number of biological processes. It stimulates B-cell proliferation, macrophage activation, immunoglobulin production, protein secretion, and phosphorylation of Stat6 protein. IL-13 is a central regulator of IgE synthesis, mucus hypersecretion and a mediator of allergic inflammation. It is involved in a number of disorders including asthma, COPD, allergic rhinitis, atopic dermatitis, inflammatory bowel disease, and colorectal cancer (39,40). Salivary IL-13 levels may reflect those observed in the airways in diseases like asthma and COPD.

Human Interleukin-17A (IL-17A), is a disulfide linked, glycoprotein that is secreted as a 17.5 kDa homodimer mainly by activated T-helper cell 17 (Th17) cells (41, 42). IL-17A is an important regulator of inflammation whose signaling induces pro-inflammatory cytokines and chemokines that recruit cells of the innate immune system to sites of infection (42). IL-17A also induces IL-23 production which drives TH17 cell maintenance and expansion. IL-17A is a marker for chronic inflammation. In fact, elevated levels of IL-17A have been associated with many chronic inflammatory diseases and autoimmune diseases including rheumatoid arthritis (RA) (43), inflammatory bowel disease (IBD) (44), psoriasis (45), psoriatic arthritis (46), multiple sclerosis (MS) and systemic lupus erythematosus (SLE) (41). IL-17A is also elevated in fluids from the lungs of patients with asthma and COPD. It comes as no surprise that IL-17A is a popular drug target and drugs (ixekizumab, secukinumab ) have been approved by the FDA for psoriasis, psoriatic arthritis (46) and are being used off label for treating RA, IBD and SLE. More specific to functions associated with the oral cavity, IL-17A is also involved in Sjogren’s syndrome and defense against candidiasis.