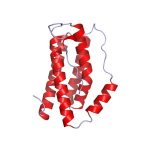 ​Interleukin-6 (IL-6) is one of a family of biologically active small protein molecules known as cytokines.  It is released by a variety of tissues, including activated leukocytes, adipocytes, and endothelial cells, and it is involved in many processes in the body.  IL-6 plays an important role in stimulating the immune response to infection or trauma by inducing the production of acute-phase proteins such as CRP and by fever induction.  (1-3)  In addition to its pro-inflammatory role, IL-6 also has anti-inflammatory properties. (4)  Messenger RNA for IL-6 has been found in tissues of healthy human labial salivary glands, and the expression levels of the mRNAs were either up- or down-regulated by adjacent focal infiltrating lymphoid cells. The epithelial cells in the salivary glands are active participants in the autoimmune-mediated process of Sjögren’s syndrome, and salivary levels of IL-6 are increased in this disease. (5,6)  Salivary IL-6 levels are also increased in periodontal disease. (7) Read More...

Researchers have found relationships between salivary IL-6 and sleep dysfunction, psychosocial factors, and stress. (8,9,10)  A study with mice has shown that normal parotid acinar cells synthesize IL-6 and store it in secretory granules.  The IL-6 is released from the granules following α- and β-adrenergic stimulation. (11)​

*Add 300 µl to the total volume of all tests for liquid handling
*In normal, healthy individuals IL-6 ranges commonly fall below the level of detection