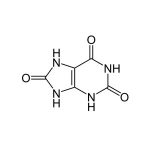 Salivary uric acid may be a useful biomarker for oxidative stress research and monitoring metabolic syndrome to help mitigate cardiometabolic risk. Several studies have reported that a linear relationship exists between uric acid levels in serum and saliva. Uric acid is the most prevalent antioxidant in blood and minimizes the systemic physiological stress of free-radical oxygen species on the body preventing a state known as Oxidative Stress. The cumulative damage caused by Oxidative Stress has been linked to a wide range of health problems including cancer, cardiovascular disease and age related neurodegenerative diseases among others. Therefore, the antioxidant properties of uric acid are thought to provide a protective role against these conditions. Read More...

When uric acid concentrations are elevated in a condition known as hyperuricemia, significant harmful health effects result. Blood uric acid levels above 7 mg/dl lead to the formation of monosodium urate (MSU) crystals. After sustained hyperuricemia, these MSU crystals deposit in tendons and joints to cause severe diseases including gout, kidney stones and several forms of kidney disease. Gout is the most prevalent inflammatory arthritis worldwide and frequent monitoring of uric acid levels is critical for disease management. In the case of kidney stones, approximately 5-10% of the 3.3 million Americans seeking medical care for kidney stones are due to elevated uric acid. High blood uric acid levels are also associated with a wide variety of diseases including hypertension, increased cardiovascular mortality, obesity and metabolic syndrome.

How to Collect Saliva for COVID-19 Testing

Collecting a saliva sample for COVID-19 testing is simple and easy to do with our Saliva Collection Methods. Relax – that’s the first step! Then watch one of these video collection instructions prior to starting your collection: