In This Drop: Salivary Cotinine, Second-hand Smoke, and Child Health 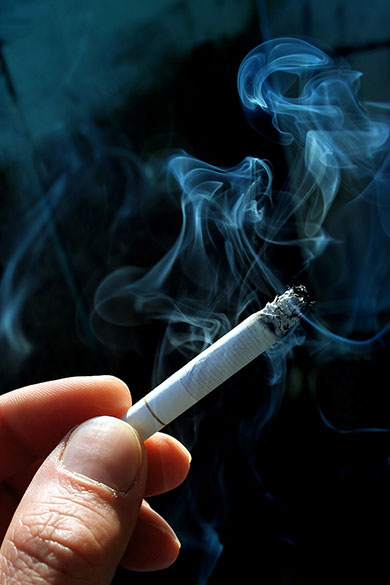 In spite of clear evidence that the use of tobacco products leads to nicotine addiction and numerous adverse health effects, smoking and oral tobacco use continue to be common in many countries around the world. Researchers interested in child development are particularly concerned about the harmful effects that smoking has on children, both during pregnancy and later in the home or daycare environments.

Studies on the effects of smoking on health have often relied on self report for the frequency of use, but these self reports are frequently inaccurate due to problems with memory or intentional false responses. A number of biomarkers have been explored in order to be able to document nicotine exposure more accurately. Due to its slower clearance and longer half-life compared to nicotine, cotinine, a metabolite of nicotine, is now the preferred biomarker used to monitor exposure from smoking, oral tobacco use, or oral nicotine products. Cotinine is routinely measured in saliva, blood, and urine, and it can also be measured in other samples such as cerebral spinal fluid, gingival crevicular fluid, meconium, amniotic fluid, toenails, and hair. This issue of The Spit Report is devoted to a presentation of some recent research involving smoking and child health that utilizes cotinine as a biomarker of exposure to tobacco smoke.

Cotinine cut-points used to distinguish smokers from non-smokers vary according to secondhand smoke exposure and to racial/ethnic group.

Precise terminology for smoking behavior can be important.

*Salimetrics provides this information for research use only (RUO). Information is not provided to promote off-label use of medical devices. Consult full text of article.

Although it is well recognized that exposure to secondhand smoke (SHS) contributes to the development of asthma in children and leads to difficulty in managing the symptoms of the disease, many inner-city children are still exposed to tobacco smoke in their homes. A number of factors including caregiver smoking, child age, maternal depression, and stress have been related to high SHS exposure among these inner-city children, but few studies have used biomarkers to verify exposure levels. This study was designed to explore the association of social and environmental factors with SHS exposure in young inner-city children who have asthma, using salivary cotinine to quantify exposure.

Children who participated in the study were identified by examining emergency department records from the Johns Hopkins Hospital and the University of Maryland Medical System. Parents who agreed to participate in the study were visited by a trained research assistant who administered the baseline questionnaire and obtained a saliva sample from the child for cotinine analysis. The interview included detailed questions designed to identify the number of smokers in the household, the locations where smoking was permitted, and other details of any smoking bans that were present. Demographic information on the child and the caregiver were gathered along with an assessment of caregiver general daily stress, stress due to caring for the asthmatic child, caregiver depression, and caregiver reports of the child’s asthma severity. Pharmacy records were also utilized to examine the use of asthma control medications.

Based on self-report, 63% of the children in the study lived in a home with a smoker. 63% of caregivers reported that total home smoking bans were in place, and 76% reported a total car smoking ban. The caregiver was most commonly the household smoker in homes with only one smoker, and 19% of the children lived in homes with more than one smoker. Based on a salivary cotinine concentration of > 1.0 ng/mL, 53% of the children were classified as exposed to SHS. This rate of SHS exposure is nearly three times the overall US rate (2007-2008 CDC data) for children aged 3-11 years who live with a smoker in the home. The mean salivary cotinine level for the children was high at 2.42 ng/mL (range 0-21.3 ng/mL).

Levels of caregiver stress and depression were high in this study population. Nearly two thirds had moderate-to-high stress levels, and over one third had symptoms compatible with depression. The study confirmed earlier findings of an association between caregiver reports of depressive symptoms and higher child cotinine levels.

Mean cotinine concentrations were found to be significantly lower for children 6-10 years of age who lived in a home with a complete smoking ban, but a major finding of the study was that children 3-5 years old living in homes with complete smoking bans were found to have significantly higher cotinine concentrations compared to the older children. Given the disparity between the reported levels of household smoking bans and the cotinine-determined levels of SHS exposure for younger children, the authors suggest that total home smoking bans may be less effective for this age group due to practical difficulties in implementing the ban. A number of factors may explain the greater exposure of smaller children: the children may need to accompany their caregiver outside the home in order for the caregiver to smoke, the home smoking ban may not always be followed due to the difficulty of leaving the child inside while going out to smoke, the smoking is often reported to take place in the bedroom (which is the location where the child may sleep), and the child may be exposed to smoke in locations outside the home where the caregiver takes the child during the course of the day.

A revealing finding of the study was that over half of the caregivers described their child’s asthma as controlled when at the same time a similar number reported that their child’s activity was limited by asthma symptoms on 4 or more days per month. Given this seeming tolerance of sub-optimal respiratory status and the documentation of high SHS exposure in spite of attempts to implement smoking bans, the authors suggest that more specific counseling is needed for caregivers in order to help them establish effective household smoking bans and to recognize more accurately symptoms of asthma in their children. Additional efforts to limit SHS exposure in locations outside the home, such as child care settings and homes of friends or relatives, are also needed.

Using data from the 2003 Scottish Health Survey, this study examined the association between self-reported secondhand smoke exposure (confirmed by salivary cotinine levels) and mental health in nonsmoking children 4-12 years old (mean age 8.3). Children reporting only secondhand exposure but with salivary cotinine levels > 15 ng/mL were excluded from the analyses due to the likelihood that they had smoked recently. Psychological distress in the children was assessed in the survey using the parental version of the Strengths and Difficulties Questionnaire (SDQ). Forty percent of the children were classified as having high SHS exposure (salivary cotinine > 0.70 ng/mL). Children in this highest cotinine quartile (> 0.70 ng/mL) had significantly higher total SDQ scores compared to those in the lowest quartile, and there was evidence of a dose-response effect across the cotinine group. The strongest behavioral associations with cotinine levels were found for hyperactivity and conduct disorder, and these associations remained significant after adjustment for possible confounders.

The Cognitive Behavioral Analysis System of Psychotherapy (CBASP) – a learning-theory-based approach that targets interpersonal skills and coping deficits of chronically depressed individuals – was evaluated as a component of a treatment program that would improve abstinence and depression outcomes in pregnant smokers, when added to standard smoking cessation counseling. For comparison, a control group participated in a time- and intensity-matched smoking cessation program with a health and wellness (HW) component. Abstinence was verified by expired carbon monoxide levels and by salivary cotinine levels < 15 ng/mL. At six months posttreatment (average 4.5 months postpartum), women with higher levels of baseline depressive symptoms who had received the CBASP component were abstinent significantly more often than those who had received the HW component. In contrast, smokers with low baseline depression were more abstinent following the HW component, compared to the CBASP treatment. Differences in abstinence between the two groups disappeared by six months postpartum, but the beneficial effect of the CBASP intervention on depressive symptoms was retained throughout the postpartum period. The study suggested that pregnant women with high levels of depressive symptoms may benefit from a depression-focused treatment in terms of improved smoking abstinence and depressive symptoms, both of which could have a combined positive effect on maternal and child health.

Black women in the US may be exposed to higher levels of environmental smoke during pregnancy due to the high levels of smoking among men and non-pregnant women in their community, which may contribute to the disparity in birth results between blacks and whites. This randomized, controlled trial tested the ability of a cognitive-behavioral intervention to reduce environmental tobacco smoke exposure (ETSE) and to improve pregnancy outcomes among black women in the Washington, D.C. area. The intervention focused on building negotiation skills with partners and other household members who smoke, along with education about the risks of ETSE to the fetus and to the newborn infant, in order to encourage the elimination of smoking within the household during pregnancy and the postpartum period. Pregnant women who reported ETSE and no active smoking were were divided into intervention and non-intervention groups. Due to the reluctance of pregnant women to admit to smoking, a cutoff point of 20 ng/mL for salivary cotinine was used to distinguish women with ETSE only from those who claimed to have only ETSE but were likely to be smokers (27% of the study). For women in the intervention group, the rates of very low birth weight and very preterm birth were significantly improved. The positive effects of the intervention were consistent for both the larger intervention group (including those with salivary cotinine > 20 ng/mL) and the selective intervention subset (salivary cotinine < 20 ng/mL).