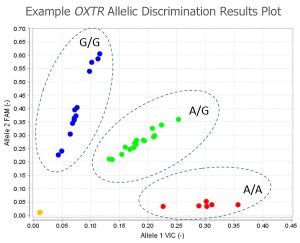 Studies of the Oxytocin Receptor Gene (OXTR) have provided critical information about the downstream effects of oxytocin on a variety of behaviors including stress, anxiety, social memory, sexual and aggressive behavior, bonding, and maternal behavior (1). The OXTR protein is part of the G-protein coupled receptor family, and is expressed in the mammary glands, uterus, and central nervous system (2). Research studies surveying behavioral associations with multiple Single Nucleotide Polymorphisms (SNPs) in the Oxytocin Receptor Gene have found links to individual differences in emotional regulation, personality traits, and social behaviors (3-7).

Three possible genetic variants exist for the most commonly studied oxytocin receptor polymorphism rs53576: A/G, A/A or G/G. Results from one study showed that individuals homozygous for the G allele of rs53576 (G/G) exhibited higher behavioral and dispositional empathy. The same study also showed that individuals with one or two copies of the A allele possess lower levels of optimism, mastery, parenting skills, and self-esteem, when compared to those with the G/G allele (8, 9). Interestingly, Bradley et al. demonstrated rs53576 G/G allele carriers who were severely maltreated during childhood showed enhanced levels of emotional dysregulation in adulthood when compared to A/A or A/G carriers (4). Consistent with these behavioral associations for the OXTR SNP rs53576, multiple other SNPs within OXTR have also been shown to have an impact on behavioral traits in several studies (10).

High quality salivary DNA is easily available without the need for expensive specialized collection devices. With Salimetrics’ DNA extraction protocol and greater than 99% call rate or genotype assignment, you can expand your data set to draw better conclusions by simply adding DNA analysis to your study design.