In This Drop: A Milestone in Salivary Cortisol Research 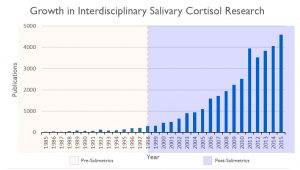 Since its release in 1998, the Salimetrics Salivary Cortisol Assay Kit has evolved from being a novel alternative to radioimmunoassay, to becoming a fundamental building block of Salivary Bioscience Research. During this evolution, the number of scientific publications involving salivary cortisol has increased over 2,000%. Salivary Cortisol is now widespread across many fields of research including:

Salimetrics is honored to support salivary cortisol researchers around the world by consistently delivering better results.

About Salivary Cortisol
Read about Cortisol in research and review technical specifications here.