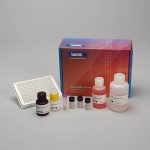 The Salimetrics Salivary Estriol (17b-triol) ELISA kit was designed for the laboratory determination of estriol in saliva samples. By making use of Salimetrics reagents, this saliva assay kit is ideal for low-level saliva estriol detection/measures with exceptional sensitivity. All Salimetrics salivary immunoassay kits are manufactured by experts in assay design and proven to deliver better results for saliva biomarkers.​
Request Advice Add to Study

The Salimetrics Estriol/High Sensitivity (HS) Estriol Enzyme Immunoassay Kit is a competitive immunoassay specifically designed and validated for the quantitative measurement of salivary Estriol. It is not intended for diagnostic use. It is intended only for research use in humans and some animals. Salimetrics has not validated this kit for serum or plasma samples.

Estriol (1,3,5(10)-estratriene-3,16α,17β-triol; E3) is a female sex steroid hormone largely associated with pregnancy and fetal development. Fetal adrenal DHEA-S is metabolized in the fetal liver to 16-OH-DHEA-S, which is then converted to Estriol in the placenta. Near term, the fetus is the source of 90% of the 16-OH-DHEA-S in the normal human pregnancy. Maternal circulating Estriol levels rise progressively during pregnancy, reaching a peak in the third trimester. The physiological roles of Estriol in non-pregnant women are not well understood and are under investigation, particularly in connection with aging and post-menopausal health. With respect to estrogenic activity, Estriol is generally thought to be less potent than Estradiol or Estrone. However, with regard to nongenomic signaling pathways and functional responses in the pituitary, it has been pointed out that Estriol is a strong estrogen. In blood, the majority of Estriol is bound by serum proteins, with about 14-16% remaining unbound. Unbound Estriol enters saliva from blood via intracellular mechanisms, and correlation between serum and saliva samples is highly significant.

This is a competitive immunoassay kit. Estriol in standards and samples compete with Estriol conjugated to horseradish peroxidase for the antibody binding sites on a microtitre plate. After incubation, unbound components are washed away. Bound Estriol Enzyme Conjugate is measured by the reaction of the horseradish peroxidase enzyme to the substrate tetramethylbenzidine (TMB). This reaction produces a blue color. A yellow color is formed after stopping the reaction with an acidic solution. The optical density is read on a standard plate reader at 450 nm. The amount of Estriol Enzyme Conjugate detected is inversely proportional to the amount of Estriol present in the sample.